The History of Seguin Public Libraries

In January of 1998 the Townships of Christie, Foley, Humphrey, part of Monteith and the village of Rosseau amalgamated to become the Township of Seguin.

Before the amalgamation there were libraries in Christie, Humphrey and Rosseau while residents in the Foley Township used the library in the Town of Parry Sound.  When amalgamation occurred Foley residents could no longer use the Parry Sound Public Library without paying a non-resident fee, or they could use one of the further library branches in the Township of Seguin.

The Seguin Public Libraries Board began consideration towards opening a library facility in Foley in 1997.  In 1999 it was decided by the Seguin Public Libraries’ Board, in conjunction with the Township of Seguin, that they would open a small library in the vacant Foley Township offices.  Prior to being a township office space, the building was the Foley School, Falding School and is presently a privately owned business.  The Board would be given an empty classroom, but would have to find shelving and a desk etc. to use. The circulation counter was the original counter from the Foley Township office.

In the spring of 2000 the Foley branch opened.  The Foley Library stayed in this location for three years.  It then moved south, down Rankin Lake Rd., into what had been the Mennonite School and Church. The library was in the basement of that building where is stayed until 2014.

In 2013 a Trillium grant was received to move the Foley Library out of the basement and into the new Foley Community & Business Resource Centre at 60 Rankin Lake Road.  The new library in Foley opened in 2014, where it is today.

Originally, the Christie Library was situated in the back portion of the Christie Township office by the village park and cenotaph.  In 1999, the Seguin Public Libraries’ Board and the Visioning Committee in Orrville felt it was time to build and relocate the library from its small space. It was to be attached to the new Community Centre that was built just outside the village of Orrville. The 2000 square foot, fully accessible library opened in 2002. 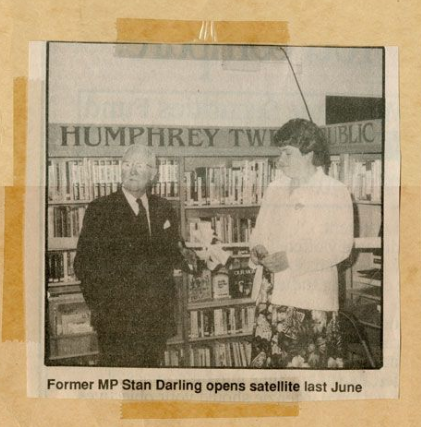 The Horseshoe Public Library Association was formed but new government regulations reduced the amount of funding to associations.  It was advised that the municipality of Humphrey take over the library so that it could receive more government funding.  On April 13th, 1961, the Humphrey Public Library was established.  When the new Humphrey Municipal Building (now Seguin Township Offices) was built in 1971, Council allocated a room for the library in the basement.  Mary Hammell/Fraser was the Librarian from 1972 to 1990.

On June 24th, 1993 the Humphrey Library hosted a grand opening of it’s “Satellite Branch Unit” after renovations on the Municipal office provided accessibility with the installation of a lift.  The lift provided access to the basement library and to the Council chambers on the second level.  In 2009 a grant was received to build a new library facility in the Humphrey Community Centre, where it sits today.

The Rosseau Historical Society also provides information and pictures on the history of Rosseau and the surrounding area.  www.rosseauhistoricalsociety.com